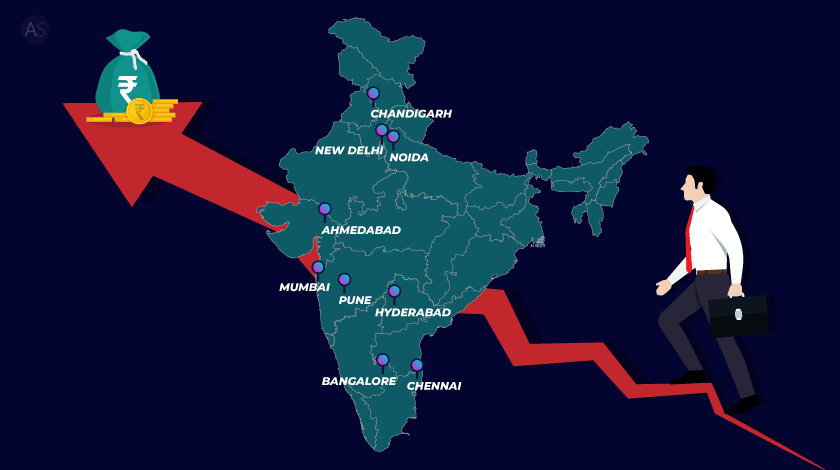 India is a vast country with a diverse range of job opportunities available in various sectors. The explosion of the tech sector and its supported services have created a massive job market that employs millions of Indians, and it only seems to be getting in its stride.

From the bustling metropolises to the smaller, up-and-coming cities, there is no shortage of places to find employment. Whether it is tech, finances, manufacturing or health services, India’s exploding job market has created megacities that can be both a starting point for your career and the next step forward.

In this blog post, we'll be taking a look at the top 8 cities in India that offer the best job opportunities. The cities aren’t mentioned in any particular order. You can take a look at the data and infer for yourself what is best for you.

Bangalore, also known as the Silicon Valley of India, is a hub for the tech industry. The city is home to a number of major tech companies, as well as a thriving start-up scene. It's not just the tech sector that's booming in Bangalore, though – the city is also home to a range of other industries, including healthcare and biotechnology.

The median salary in the city is ₹5,85,000 p.a., and it is the highest-paying city for low and medium-level roles, making it the best city in India to start your career.

Hyderabad is another city that has seen significant growth in recent years, particularly in the tech sector. The city is home to a number of major tech companies, as well as a thriving start-up scene. In addition to the tech industry, Hyderabad also has a strong presence in the pharmaceutical and biotech sectors.

The average salary in Hyderabad is around ₹4,82,000, and the growth rate of job vacancies in the city is 10%. This is another great city for freshers to start their careers.

Chennai is a major hub for the manufacturing and automotive sectors, with a number of major companies based in the city. In addition to these industries, Chennai is also home to a thriving start-up scene and is becoming increasingly known for its IT and healthcare sectors.

Chennai has an employment growth rate of 6% and a credit growth rate of 16%, and with a median salary of around ₹4,44,000, it is one of the best cities for those looking for steady growth in their careers.

Mumbai, the financial capital of India, is home to a range of industries, including finance, media, and entertainment. The city is known for its high median salary, with professionals in the finance and IT sectors earning particularly well. In recent years, Mumbai has seen a surge in the number of start-ups, providing even more job opportunities for skilled professionals.

Although the average salary, which is ₹4,98,000 in the city, is not as high as its stature, it is still one of the best places to start your career as it has the highest job vacancies for freshers in the country. It is also the highest-paying city for high-level jobs. So, if you are looking for growth later on in your career, this is the city to go to.

Pune has exploded in recent years. Due to its close geographical affinity to Mumbai, which is choking for space, many of the tech and manufacturing giants have set up shops here. Add the already existing automobile and services industry to it, it makes for a thriving job market.

The city doles out an average salary of ₹5,30,000, which is vastly superior to most Indian metros, including Mumbai, and the city itself is a great place to stay, making it one of the best cities to move to.

Noida is among the top tech hubs in the country. It is home to some big fortune 500 names and is definitely a top three destination in India for tech employees. Since most tech hubs are located in the south of the country, if you want to stay in the north, this is the most suitable place for you.

With an employment growth rate of 16% and a median salary of around ₹5,00,000, it is definitely one of the best destinations for taking the next step in your career.

Chandigarh, while not a metropolitan city on the same level as Bangalore, Mumbai or Delhi, has slowly carved a name for itself as a favourable destination for career-oriented individuals. The city has grown exponentially, especially in the telecom sector.

With an average salary of around ₹5,52,000, which is among the highest in India, it is a no-brainer why this ranks in the top 8.

Ahmedabad, the largest city in Gujarat, is a hub for the manufacturing and textiles sectors. The city is home to a number of major companies in these industries, as well as a thriving start-up scene. In addition to these industries, Ahmedabad is also becoming increasingly known for its IT and healthcare sectors.

While the employment growth rate in the city is just 2%, hardly worth a mention compared to others on this list, the city has a brilliant median income and a relatively cheap cost of living. A great place to start off your career!

There are many metropolitans and upcoming tier II and III cities that can be stepping stones for your career. Almost all of them offer great job opportunities and a brilliant standard of living. You need to see what you need at that moment in your career, your area of expertise and what that city offers as a place of living. If all these are desirable or at least close to it, then that is the place to go to.